The first church visit of the year took place at St George’s Church, Modbury today. It’s a beautiful church and one I’ve not visited for many years. I always find revisiting a church a worthwhile experience; each visit reveals something new!

St George’s is a true parish church in so many respects; a true church in that it has altered and changed constantly over its 1000 year history.

Its early history marks close associations to Modbury Priory – a cell of the Benedictine Abbey of Ste. Pierre-sur-Dives in Normandy.

Pevsner’s ‘The Buildings of England – Devon’ records of St George’s:

Quite a remarkable church, above the town, the characteristic silhouettte of its steeple visible from far afield. It consists of a tower with angle butresses with many set-offs which do not reach very high up, and then, without any intermediate battlements, a spire with one tier of small dormers. It is said to have been struck by lightning in 1621 and rebuilt; if so, it represents its early C14 predecessor accurately.

Much of the body of the church also goes back to the C14, notably the masonry of the walls of the nave, the arches between nave and aisles with their thick and short piers with odd bevelled capitals, without necking and similar arches, and the transepts (datable by the tomb recesses in their outer walls).

In the South Champernowne transept, two recesses in the style of c1300 with five cusps and trefoiled subcusps. A head at the apex of each main arch. Within are a shapeless lump and one later effigy of alabaster, a knight in armour with a collar of roses, of c1460. In the north Prideaux transept a single, more elaborate C14 recess, deep enough for two effigies (now hardly recognisable). Ogee arch with crockets, flanked by flat pinnacles resting on atlas figures.

On entering the church one instantly notices the light of the building; many of the windows are plainly glazed or contain coloured panels and are not traditionally of “stained glass”. The stained glass in the building is very lovely, the east window being perhaps the most striking; although the western windows of both north and south aisles contain some pretty imagery.

It is immediately noticable to the visitor that the church contains a great number of interesting memorials to former benefactors and residents of the parish. Perhaps the most noticable, to me at least, was the memorial high in the nave – at the eastern end of the nave. This particular memorial stands to the memory of Anne, the wife of Nicholas Downey; daughter of Thomas Bradley of Lincoln, Esq. She died in 1639. The memorial is one of the most wonderful of the period; with kneeling figures of Anne, her husband, and five children. It seems a terrible shame the memorial is up so high – but perhaps this is where it’s always been located?

Another rather impressive memorial, aparently recently restored, stands in memory of John Swete of Traine who died in 1690. Its Latin inscription records amongst other things that he was of Exeter College, Oxford and that he died at the age of 25 years. The memorial’s inscription is encircled by a beautifully decorative wreath border.

The pulpit was another item within the church to draw my attention. This wonderful relic appears to have been created from portions of the old Rood Screen and could date from any time after the reformation to the early C17 I suppose; depending on when the Rood Screen was dismanted or lost.

The chancel is rather plain; its former stunning C19 reredos (erected c1860) now sits in another part of the church (blocked from view). The sedilia are present on the south side of the altar, although the traditional piscina isnt there – unless that’s been converted to the Tabernacle in the north wall of the chancel?

The most stunning aspect of the chancel is the great east window – of 5 lights and very much in the taste of C19 Gothic revivalism. This window is, according to Pevsner, the work of Lavers & Barraud. The window is a memorial to the Rev. Nutcombe Oxenham who was Vicar of Modbury from 1834-1859. Helpfully the excellently produced ‘Church History’ records that the window depicts – St Augustine; Moses separating the Israelite and the Egyptian; the Last Supper; Our Lord preaching and St George the Patron Saint. Its a striking window, and as a lover of stained glass, I would say this deserves close attention to really see the detail.

The huge tower arch of this church, unlike so many others, isnt blocked by a screen or other barrier. In effect this enables the visitor to walk into the ringing chamber – a rare treat – and a great chance to see the whole vista of the church, the nave, chancel and aisles from a great vantage point.

Today the tower houses six bells; noted as the second best peal of six bells in Devon. Quite an accolade!

Notably, perhaps, its worth pointing out this church possesses three fonts! The marble font in its prominent location at the rear of the central aisle, and just before the tower arch, is C18. It replaced an earlier font which is now sited outside the church. This earlier font is far more interesting. Its octagonal shape and shield place it from the C15. It appears to have been replaced by its C18 successor at some stage during that century. The third font within the church is the font which stood in the Brownston chapel-of-ease. It was moved to St George’s Church when the chapel was closed. 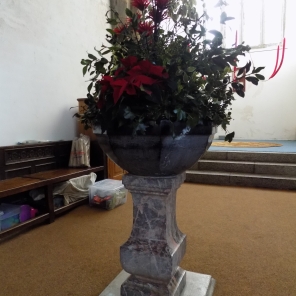